Inspiration .. Found .... the return of the Doc

lets get the poker nonsense out the way first. Another wee 1200 hand sesh last night in which I managed the not to shabby rate of +8 bb/100. Obv not retiral money but still feels good to get a third run-good session in on the trot.

Things have got a lot quieter at the cash tables now that 'stars 95 billion promotion has now been consigned to the history books. I was looking at the higher levels that I don't normally play when my eyes almost popped out their sockets.
Well fuck me sideways, there he is, sat at a 50c/$1 table !
The he in question, was none other than mr Supernova himself (or is that mr supernova fucking elite ?).

Talk about temptation ? It was all I could do to NOT join the waiting list !

To be fair, that was the only cheap table he was at. All the others had a slightly higher buy-in. You know, like, $75/$150 .... ugh, fucking nosebleed just thinking about them, lol.

Now, although I don't frequent the $1 tables, I'm pretty sure that they do not normally have a very big waiting list. This one was the only full $1 table .... with 9, yes that's nine ! count the fuckers ! in the waiting list. Yeesh, nine deep at the bar .... that's a whole lot of waiting ....

Now, they may or may not, have been queueing up to play the guy (I obv didn't recognise any of the other players at the table) but it just seems a tad odd .... the guy never (usually) plays this low and they're queueing up left and right ....

In other vaguely related poker news. Dr Pauly is back !

Yes, yes, I know. He has never been away, ffs. I have to admit, I was a huge fanboy of the Tao of Poker but for whatever reason I'd never really paid attention to the Doc's other sites. If there's one poker blog you should read (even although it is on "indefinite hiatus") it is the Doc's tao of poker. I think the main attraction is the fact that he tells it as he sees it, not much sugar coating going on over there !
Oh, if I can find the link to his stories regards his degen crew I'll post it here ....

pleasant dreams
Posted by dD at 17:02 No comments:

baby steps .. who cares ? right direction .. all that matters

changes still ongoing, had some small joy at the virtual felt.

First session and it feels like learning to play all over again, lol.

After a few sessions, I might actually be doing something right.

pleasant dreams
Posted by dD at 17:34 No comments:

post session EDIT - 550 hands, $5 tables were breakeven affairs, not bad considering the amount of randoms playing any four cards, lol. Hard to put these guys on hands -)) the three $10 tables were a lesson in ball breaking card dead frustration, standard I guess for such short sessions -((

New month and I've started to implement small lifestyle changes. Too late to save February obv but gotta start somewhere.
February graph is posted below. First three weeks were acceptable but the arse fell out of it towards the end of the month. I'm fairly sure I know exactly what those leaks were, ugh.
Nothing else for it but to get back in the fucking saddle. 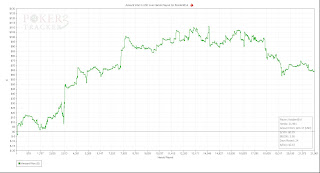 Since everyone has gone to bed early, I'm putting in a small session tonight. Somewhere North of 500 hands I hope. Time to play with the drunks and not as a drunk -))

pleasant dreams
Posted by dD at 21:25 No comments:

"she"s very callipygous (put your beer down and look it up, you fucking hick)"